Inflatable protective vests have become standard safety gear for eventers and have prevented innumerable injuries. But no matter the brand, their effectiveness is limited by a mysterious thing that theoretical physicists call "gravity."

Until now. The hack crack engineers at VTO Saddlery have overcome this fundamental force of nature with a revolutionary new product - the Helium Canister. Compatible with most existing air vests on the market, the Helium Canister replaces those antiquated CO2 cartridges that are weighing you down. Plus, CO2 is a greenhouse gas. Do you really want that on your conscience the next time you have an unscheduled dismount?

Helium, on the other hand, is lighter than air. It's what makes balloons and zeppelins float. And now, for the first time, it can make you float too! Air vests can protect you in a fall, but you are still falling! Why settle for that when when you can float gently to the ground as your air vest slowly deflates? It is literally a no brainer!

Want to see it in action? Here is world-famous rider Arden Wildasin demonstrating the product in its first documented use in competition: 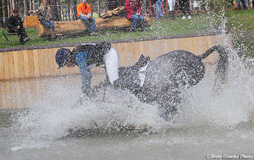 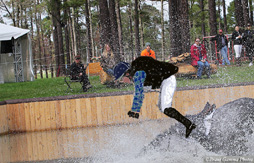 In the first photo, things don't appear to be going so well. But in the second photo her air vest with the Helium Canister deploys and instead of snorkeling, Arden is safely above the spray. By the third photo (elapsed time: 1.4 seconds), she is well clear of the horse, and by the fourth photo, she is nearly clear of the course. Both the horse and Arden emerged unscathed. Following the incident, Arden gave this ringing endorsement: "I think all riders will agree that this product is truly unbelievable!"

As with any technically advanced product, the Helium Canister comes with some cautions: